Our #WomanCrushWednesday goes out to a woman sometimes referred to as the “mother of the freedom movement”, Rosa Parks. She grew up in the segregated South – both her grandparents were former slaves. KKK marches down her street weren’t unusual. Young Rosa had to walk to her segregated school, since only white children were allowed to ride school busses. She had to leave high school before she graduated, to take care of her sick grandmother and mother. At the age of 19, she married Raymond Parks, a barber and active member of the NAACP, and soon became active in the civil rights movement herself. (He also encouraged her to return to school to get her high school diploma, which she did.) Rosa Parks is best-known for refusing to give up her bus seat to a white passenger and her subsequent arrest. That act of defiance sparked the Montgomery Bus Boycott, the success of which led to desegregation of city busses and eventually a nationwide effort to end public segregation. 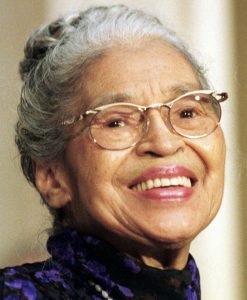 Rosa Parks in June 1999, when she was presented with a Congressional Gold Medal.

In 1965, she started working for Michigan Congressman John Conyers, Jr. and remained on staff for more than 20 years.

In 1987, she founded the Rosa and Raymond Parks Institute for Self-Development, which is still thriving today in its mission of getting young people involved in civil rights education and advocacy. She has written four books, including a charming children’s book entitled I am Rosa Parks.

Time Magazine voted Rosa Parks one of the most influential people of the 20th century. In 1996, former president Bill Clinton awarded her the Medal of Freedom, the highest award given to a civilian. She also received the Congressional Gold Medal in 1999 – just a couple of the dozens and dozens of awards and honorary degrees she received.

Rosa Parks died in 2005 – she would’ve been 106 on Monday. She shares a birthday with our very own Christine DeCastro and Shaina Weinstein!

I have learned over the years that when one’s mind is made up, this diminishes fear; knowing what must be done does away with fear. 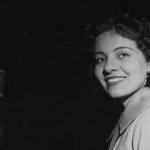