More than three decades ago, Poison’s alter ego, Kevin Cook, used to go dancing at the all-ages gay club in downtown Portland, which featured drag shows at midnight. Originally, Kevin wasn’t a fan – after all, these shows interrupted his dancing! But one night, he watched a group of black drag queens perform a medley from Dreamgirls. Kevin was intrigued, as he’d never seen a black drag queen before. Months later, one of them – Rosey Waters – asked the crowd if anyone wanted to learn to be a queen. Kevin raised a hand, and Poison Waters was born! 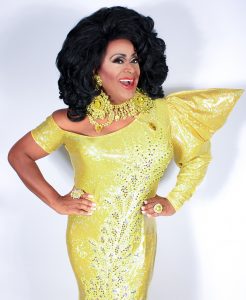 Poison’s heart really is as enormous as her hair. Helping people who need it makes her feel good – she is motivated by the success of others and has spent more than three decades (!!!) coordinating, participating in and hosting benefits and shows. Poison is a true community builder, having helped entertain crowds and raise money for dozens upon dozens of schools and charities, including the Cascade AIDS project, Dress for Success Oregon, the Make a Wish Foundation, the Human Dignity Coalition, the Right Brain Initiative and the Oregon Humane Society – just to name a few. We always love working with her! Poison is passionate about every event she works and has a reputation for being professional, prompt, accurate and fair. Career highlights include appearances with Pink Martini, opening for Storm Large, and a recurring role – ten years running – in the Oregon Ballet Theater’s The Nutcracker. When she’s in town and not busy with benefits, she’s co-hostess the Darcelle XV Showplace – a gig she’s had for more than 25 years.

Personally, Poison Waters is very proud of the work she’s done with the Cascade AIDS project. She (as her alter ego, Kevin) is the Camp Director for Camp KC – a weeklong summer camp for children whose lives are affected by HIV/AIDS. Next year marks her 20th year – there are now campers who are the children of former campers. Talk about commitment! Poison is committed to bringing levity, laughter and light to every situation she can. 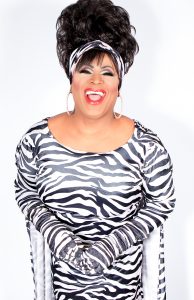 Poison loves a challenge. She may not be able to drive, but this globetrotter has been skydiving and has rappelled down a 24-story building. She has traveled seven feet underground through the aqueducts in Peru and swam with turtles in the Caribbean and Hawaii. Let’s give her a huge round of applause and hope she continues to be a shining light in the darkness! 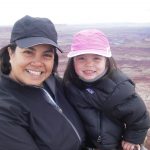