This week’s #WomanCrushWednesday goes out to Katie Hughes, carpenter, welder and all-around badass who started the nonprofit Girls Build to help young girls get exposed to the trades. 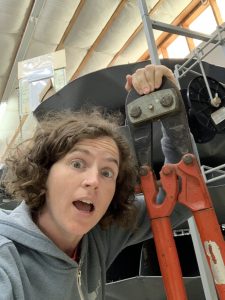 Katie studied social work in college and helped build houses for Habitat for Humanity in her off time. After graduating, she tried to get a job in her field, but all the ones that appealed to her required master’s degrees. She met a contractor while working 16 hour days on a huge Habitat event, who hired her as a carpenter – an auspicious meeting, as she only had a few hundred dollars to her name! Katie worked for the contractor for a few years and continued her work with Habitat, through which she found Oregon Tradeswomen, an org dedicated to promoting success for women in the trades. She started working for Oregon Tradeswomen, and when they got a grant for a summer camp, Katie was asked to run it. She did so for several years, but she experienced burnout and had to leave Oregon Tradeswomen. A year later, the program was cut. It was upsetting to so many people – Katie heard the same question, over and over – “What are we going to do?” Then something strange happened – Katie was in a hotel, on vacation, when she ran into an electrician she knew from Tradeswomen. (LITERALLY ran into her – they’d been staying next door to each other and neither had any idea!) The electrician told her that when people ask, “What are we going to do about the program?” – what they’re REALLY asking is, “What are YOU going to do about the program?”

So she did something. She got a bunch of women together – mostly tradeswomen, a grant writer, and Girls Build was born. The camp has exploded in popularity in just four short years. It was a two-week camp in 2016, serving 85 girls – this summer, 10 weeks of camps in five different locations, serving nearly 400 girls. Now there are weekend and after-school programs as well. It’s invaluable. Not only are girls learning real-life skills, they’re gaining confidence. Katie fondly remembers a camper telling her mom, “Look, I have swagger now!” It’s accessible to all – a former camper is a girl with autism and it was a huge confidence booster for her. People fly in from New York, DC, Texas – she doesn’t advertise and the program still gets this kind of attention. Maybe in part because Girls Build was featured on the Discovery Channel show Dirty Jobs with Mike Rowe in 2017 – a wonderful surprise for Katie, as she thought she was signing up for a documentary on nonprofits – turns out the show was honoring Girls Build!

Katie is on a mission to make DIY projects less intimidating to women of all ages. She wrote and published a book – Girls Who Build – after interviewing women all over North America. It’ll be available in October. Read it before you walk into a hardware store next time and see how much more comfortable you are!

The tireless Katie is also a foster parent. She has two kiddos and admits most of the time she’s running around like a crazy person. She’s also the first in her family to go to college. 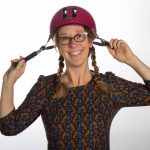