January is Human Trafficking Awareness month and this week’s #WomanCrushWednesday goes out to Robin Miller, who has dedicated her life to ending commercial sexual exploitation – not only through supporting victims, but also through educating buyers.

Robin was recognized by the Oregon Department of Justice for going “above and beyond” in her advocacy with survivors. She has a strong Christian faith and she firmly believes Jesus Christ saved her from a life that was trying to kill her, so that she could share with other victims that there IS another way – it won’t be an easy road, but it IS a possible road.

Robin is currently a case manager with Janus Youth Programs in Vancouver, Washington. She provides service and support for commercially sexually exploited youth, between the ages of 12-24.

Prior to that, she worked at LifeWorks NW, as a case manager and mentor for the New Options for Women program. She provided peer support and advocacy for adult women who were victims of commercial sexual exploitation. Robin regularly speaks to people on the topic, including men convicted of buying sex, through a Multnomah County diversion program known as “John” school. The point is to educate buyers on the consequences of their actions – namely, how much it hurts people – so they won’t want to do it again.

Robin was honored to be a part of a panel of amazing survivors, at a conference hosted by the Minnesota Indian Women’s Sexual Assault Coalition. She regularly presents in front of national conferences, faith-based communities, high schools and other social service providers. And yet somehow, she finds the time to sit on the Department of Justice’s Trafficking Intervention Advisory Committee!

Robin was a non-traditional student and one of her proudest personal accomplishments was finishing school. She graduated from Portland State University with a degree in Social Science in 2012. She has a pretty simple and straightforward message for the world: BE NICE!!! 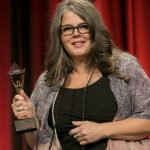