It’s Pride Month and this week’s #WomanCrushWednesday goes out to Kamron Graham, Deputy Public Guardian and Conservator for Multnomah County and past President of OGALLA: The LGBT Bar Association of Oregon. 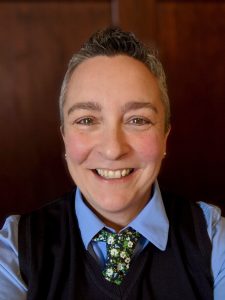 Kamron Graham worked as a Program Officer for United Way of the Columbia Willamette and as Director of Case Management at Transition Projects, Inc. for 13 years. She always wanted to go to law school, but life got in the way – until one day, it didn’t! Kamron woke up and realized having a law degree would enable her to help people in a different way. She thought it’s now or never. She was 37 when she enrolled at Seattle University School of Law and graduated just before she turned 40. While there, she volunteered at the Q Law Community Legal Clinic, served on the Washington State Board of Trustees, and interned as a public defender in King County’s mental health clinic. Kamron has ALWAYS been focused on public service and advocating for vulnerable people.  She’s motivated by change – she strongly believes that every day, we ALL have opportunities to make our communities – and the whole world – a little bit better. Whether that’s being a good neighbor, helping a coworker or calling your mom, we are ALL capable of the little things. And many of us are also capable of the BIG things – standing up for your ideals, fighting against oppression, serving as someone’s mentor.

As a queer womyn, Kamron admits she has suffered self-doubt over the years. No more! For Kamron, it’s personal – eradicating the cycle of LGBTQ and womyn feeling less than starts with her. She 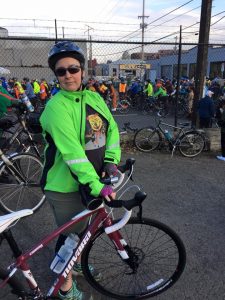 can talk positively about herself and break the cycle of womyn not being able to be confident without being called the b-word. Or being labeled angry. Or any of the other negative words frequently used to describe strong womyn. Busting stereotypes, accepting different views and different ways of doing things are all very important to her.

Kamron spends a lot of time volunteering and is proud of the work she does on boards and committees, helping others accomplish their goals. She loves building bridges and relationships and has been recognized for her hard work, as the 2020 recipient of the Multnomah Bar Association Diversity Award. Being a lawyer is great – with a simple phone call or written memo, Kamron can ensure someone’s safety, help them get their needs met or protect their rights. She fights hard for success and leadership for people not historically in those roles. Kamron believes the term “the future is female” is an understatement – the future IS female and it is also queer, trans, black, Latinx and non-binary. And it’s time to change the institutions and culture that allow us to keep people oppressed.

While Kamron loves her job as an attorney, she still occasionally dreams of being an astronaut. She’s not afraid of much – a few years ago, she rode 200 miles from Seattle to Portland! She loves haunted houses and roller coasters – the faster, the better. Just keep her away from clowns and kittens – they DO scare her. When she’s not fighting for vulnerable people, you’ll likely find Kamron at a Portland Thorns or a Seattle Mariners game. Kamron loves being an Auntie to three amazing, hilarious kiddos. She’s also a big fan of live music and good whisky.