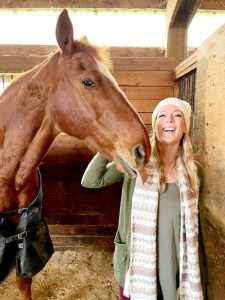 It’s Human Trafficking Awareness month and this week’s #WomanCrushWednesday goes out to Esther Nelson, the founder of Safety Compass – a nonprofit offering advocacy and support to survivors of sexual exploitation and trafficking.

Esther grew up in Molalla and graduated from Marylhurst University. Her career path was set in motion nearly two decades ago, while she was volunteering at a crisis center in Nevada. She was struck by the inequity in care and services available for those who had been trafficked. A lot of women she saw already had some exposure to sexual violence, due to their involvement in the industry. As an example, if someone had been trafficked in a strip club, they couldn’t access the services the crisis center offered. Esther thought that was really unfair!

She moved back home to Oregon and started working at SARC (Sexual Assault Resource Center). In 2009, she launched a pilot project to study trafficking in Oregon. Many thought it wasn’t happening here. They were wrong. Esther’s pilot project expanded access to care for folks in four counties: Marion, Clackamas, Washington and Multnomah. For Esther, it’s pretty much always been about expanding access to care and removing barriers to care. Equity. 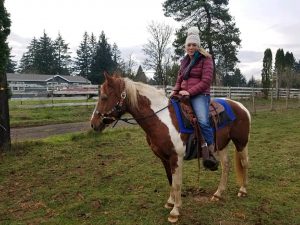 Esther left SARC and thought she was taking a break to raise her family. But during her “break” she kept getting phone calls and knocks on her door in the middle of the night, from people who needed help or knew someone who needed help. She didn’t want to waste her knowledge and experience, so she started Safety Compass. The organization helps sexual assault survivors find resources, paths to healing and so much more. Safety Compass officially became a nonprofit in 2016. Their number one priority is emergency response. Safety Compass, covering four counties, responds within ONE HOUR once they get a call from someone in crisis. 24/7! That’s the front end of the triage process. Another important part of Safety Compass’ work is training people what to look for – red flags, so to speak. For law enforcement and others, recognizing those warning signs is a huge part of the fight against sexual exploitation and trafficking. 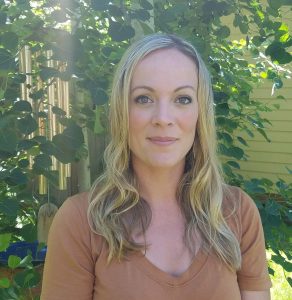 When YOU think of human trafficking, what do you think of? Someone locked in a room, cut off from everyone except their captor? While that certainly does happen, human trafficking takes many other forms, physical AND emotional. Particularly vulnerable victims – teenagers, for example – may think their trafficker is romantic. That’s because traffickers are skilled at presenting but distorting ideas that victims desperately want to be true. “You have so much value, you could be famous! You could be rich!” Esther calls it ‘trauma of the heart.’ And recovering from it is a long, arduous process. But Esther is there every step of the way. She watches and helps survivors come full circle – the struggle, the setbacks, and eventually, the arrival at that intangible place where they FINALLY believe they’re worth it just as they are. When they realize they don’t have to be famous to be valuable. In Esther’s words: “Knowing their own worth so they can speak it.” That sort of work is not just rewarding. It’s award-worthy!

In her free time, Esther loves spending time with her family, hiking and riding horses. Horseback riding is more than a hobby – it’s where Esther the therapist finds her OWN therapy! 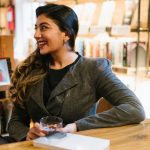