This week’s #WomanCrushWednesday goes out to Adrienne Livingston, Director of Anti-Sex Trafficking Initiatives with WorldVenture and recipient of the Bolstering Community Award from the Center for Women’s Leadership.

Adrienne grew up in Portland and graduated from Jefferson High School. She earned her bachelor’s degree from Oregon State University (Go Beavs!) and a Master’s from Western Seminary. Adrienne was working at the Black United Fund of Oregon, when she admits, she experienced burnout. Now here’s a story for anyone doubting the power of prayer: Adrienne has a very strong Christian faith. While praying for guidance, a phrase popped into her head – “Sex Trafficking.” (A year or so prior, Adrienne watched the movie “The Whistleblower” – it’s based on a true story about an American police officer who visits Bosnia and makes an absolutely horrendous discovery – girls are being lured to the country for what they think is an internship, but once they arrive, their documents and passports are taken and they’re forced into sex trafficking.)

Adrienne was already part of the Multnomah County Commercial Sexual Exploitation of Children board of directors, plus she had a friend who worked at WorldVenture…that combination resulted in Adrienne becoming the Director of Anti Sex Trafficking Initiatives with WorldVenture. The position was essentially created for her, and a donation from the MJ Murdock Charitable Trust made it possible. Adrienne is a visionary and an entrepreneur, and her boss is not a micromanager – he lets her thrive! She followed her heart and now she spends her days educating people across the globe about warning signs and who should be held accountable. Last year, she created a curriculum to train middle and high school girls how to identify and prevent sex trafficking. And if you think it’s not happening here – you’re wrong. It’s everywhere. But so is Adrienne – she’s literally going global with this curriculum. In August, she took it to Zambia, Africa, where she and her partner Michelle trained 11 Zambian woman. What’s more – these women, who are very very poor, are now getting paid for training. So the unstoppable force that is Adrienne Livingston is creating jobs, as well!

Adrienne received the Bolstering Community award earlier this month, at the Center for Women’s Leadership PowerLunch 2019. For fun, she teaches yoga with a Christian vibe – for her, it’s a physical activity with a spiritual bent. But you don’t have to be a Christian to attend – it’s for everyone! Learn more at justicehopefreedom.com 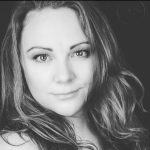 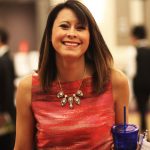